Flipkart which pioneered as an online book store in 2007 marked the biggest integration in the e-commerce space in India today by acquiring Myntra, which is an online fashion retailer. While financial details of the deal have not been revealed, sources in the organization inform that this long awaited and a very major acquisition is valued close to $300 million. (According to a Reuters report). 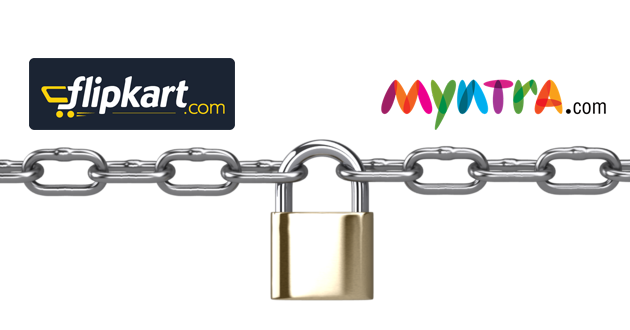 Sachin Bansal, a co-founder of Flipkart which is now the country’s largest online retailer said that this is a hundred percent acquisition and going forward, the company has big plans for the segment. “Flipkart and Myntra are getting together to create one of the largest e-commerce stories and together we will dominate the market. We, at Flipkart, believe that we want to be leaders in every segment and fashion is a category of the future, this acquisition will help us become leaders in this category”, he added.

Flipkart has nearly 3000 employees while Myntra has 750. As per estimates, both companies which are based in Bangalore, will continue to remain distinct entities and will operate according to their own business plans, while Myntra co-founder and CEO Mukesh Bansal will be joining Flipkart board and heading the fashion business. “It was very essential to keep Myntra a separate entity and preserve its culture. I’m here for the long haul and we will continue to grow in the market”, he said. Hence, according to reports, Myntra is expected to continue functioning as an independent entity, however, it has not been made clear if Flipkart will be a part of Myntra’s operations or will it be taking over just the brand name. Those expected to gain big from this deal in monetary terms are nearly two dozen top executives at Myntra. If the company retains its individual identity and its operations as per the reports, it will mean that its regular customers will continue to trust in the brand name and its business strategies, and the inclusion of Flipkart’s name will definitely attract new users based on its trusted status and its quick growth in India’s e-commerce division.

This deal is expected to give Flipkart a stronger hold on its fashion portfolio based on which it can compete strongly with other retailers such as Amazon and Snapdeal. Flipkart plans to invest $100 million in its fashion segment in the near future. Currently, Myntra holds around 30% of the fashion e-retail market which is expected to increase to 50% with the acquisition.

Flipkart was founded by Sachin Bansal and Binny Bansal and they count Naspers, Tiger Global, Accel Partners, Dragoneer, Morgan Stanley, Sofina and Vulcan Capital among their investors, from whom the platform has raised over $500 million.

In the past few years, India’s e-commerce market has seen a huge surge with increasing demand among the internet savvy generation especially young people who flock these platforms for purchasing almost everything ranging from books, clothes and electronic gadgets to kitchen appliances and home decor commodities. Presently, this industry is estimated to be worth $3 billion, housing successful firms like eBay, Amazon, Homeshop18 and Snapdeal other than Flipkart and Myntra. The increasing demand for online purchases can be proven by the fact that Flipkart’s annual sales crossed $1 billion mark a year ahead of its target, which was 2015.

Both companies synergizing various segments will be advantageous for the two platforms as well as the buyers who have been very enthusiastically following news about this acquisition. With many new facilities offered by Flipkart in order to be at par or ahead of Amazon’s performance in India, buyers have been enjoying services like virtual branded stores, a customer loyalty program called Flipkart First and same day delivery of products. With fashion centric Myntra entering the scene, users will have a lot more to look forward to.