We recently studied the city wise trend for online shopping in India based on our traffic (CouponzGuru) for the month of January to April 2014 and this post talks about our conclusions and some really exciting findings!

Online retail in India has been growing exponentially since the last few years; the testament to the fact is the ever increasing balance sheets of the major players and the mushrooming up of a new online retail portal every few weeks. In our quest to find what drives Indian retail, we thought of finding the major cities which gives Indian online shopping portals a chunk of their revenue. The major hurdle of any research is finding accurate data which is coherent with the topic, which was also a challenge for us. 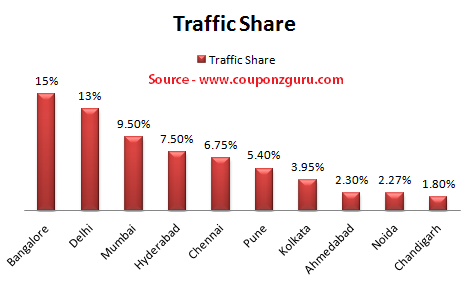 Most of the online shopping websites in Indian context are ‘Private Limited’ Companies i.e. they are not bound by regulations for mandatory disclosures regarding financial and other aspects of their business. Moreover, we thought that data from one or two online shopping websites won’t be accurate as it would be biased in favor of the cities whose residents shopped the most on these particular websites. Finally lightning struck and we thought why not use the data from ‘coupon’ site as it would give us the data we need without being biased towards a particular city or online shopping portal. The data and statistics used in our findings have been taken from the traffic statistics of couponzguru.com, rest assured it’s highly accurate from our standards as the sample size was fairly large.

The results of our findings were somewhat obvious (but few surprises as well) as most people believe that when it comes to online retail, India’s Silicon Valley Bangalore leads the pack and as the data shows, it surely does with 15% of the traffic coming from the City. Being inhabited by the most number of techies and being home to several top players in Indian online retail segment contributes in making Bangalore as the city with most online shoppers. Right behind Bangalore is Delhi (to be accurate Delhi + Gurgaon) with a traffic share of 13%. Gurgaon is also home to some of the major online shopping portals and has a sizeable number of techie’s population, these factors combined with the population helps Delhi in achieving the no. 2 spot.

There was a tough tussle between Ahemdabad and Noida for the 8th and 9th position but the ‘business’ city of Ahemdabad took the lead with a marginally better traffic share of 2.30% than that of Noida’s 2.27%. The 10th and the final position on the list was grabbed by Chandigarh with a traffic share of 1.8%, another achievement by a city with lesser population than that of its rivals.

While looking at the list, one must not think that the cities with the highest traffic are the ONLY places which are driving the growth of online retail. Considerable growth in the online retail business is coming from the hinterland of India but being less populated than the cities those places won’t find a mention in a list focusing on the amount of traffic provided by the residents of a city.