There is nothing that can match the ease of communication that comes with owning a mobile phone.The e-commerce platform has made it possible for mobiles to sell like hotcakes in India. So which were the mobiles phones that proved to be an instant hit among consumers in 2015? Read on to know more about the bestselling mobiles of 2015 in India. 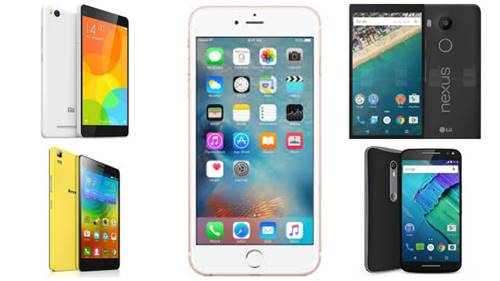 India is Apple’s next big market. For iPhone fans who were ready to splurge on their mobiles, iPhone 6s and 6s Plus were the best choices of 2015.Launched in the last quarter of 2015, iPhone 6s is powered by Apple’s A9 64-bit processor and has a 4.7 inch LED-backlit HD display. A new touchscreen interactivity feature called 3D touch has been included. The phone sports a 12 megapixel camera and comes in three storage variants of 16GB, 64GB and 128GB.

The Lenovo A7000 is the best budget smartphone to hit the Indian market in 2015.  It has a 5.5 inch HD display with a 1.5GHz MediaTek octa-core processor. Equipped with an 8 megapixel autofocus rear camera and dual-SIM slots, the mobile supports Dolby Atmos sound technology. Its modest price definitely made it a best-seller in 2015.

The Google Nexus 5X is the best smartphone offered by Google in collaboration with LG.  It sports a futuristic design with its fingerprint sensor and USB C-port. It is Google’s most inexpensive Android mobile of 2015. It comes with a 5.2 inch display, Snapdragon 808 chipset, and 12.3 megapixel rear camera and is available in 16GB and 32GB storage variants. The Android 6.0 Marshmallow software offers good performance making this mobile perfect for daily communication.

The Moto X Style or Pure edition has a 5.7 AMOLED display with a Qualcomm Snapdragon 808 chip. The mobile comes with 16, 32 and 64 GB storage options with a 21 MP rear camera. It features the world’s fastest turbo-charging technology. This mobile emerged as a clear winner in 2015 because of its superior design, display, camera, and battery life. The phone supports the Moto Maker program that lets you customize the phone according to your requirements.

Xiaomi captured a chunk of the Indian market in 2015 with the launch of its Xiaomi Mi 4i. This is a phone that features a compact design and can be used easily with one hand. It is less susceptible to smudges and scratches. Xiaomi has made use of a special technology called ‘Sunlight Display’ to ensure that graphics are displayed with high quality even under direct sunlight. It features the latest operating system from the company, Android 5.0 Lollipop-basedMiUI 6. It has Qualcomm’s 64-bit 1.7GHz octa-core Snapdragon 615 processor with 2GB RAM. With a 13-MP rear camera and smooth transition effects, this mobile is a worthy rival to more expensive smartphones.

While the list above gives you the top mobile picks of 2015, there are many more mobiles that make a good buy. You only have to equip yourself with the right knowledge and do some smart shopping online.