Google took off wraps from its new Nexus lineup which includes a new Motorola Nexus 6 running on Android 5.0 Lollipop. It is essentially a flagship smartphone and will compete against the likes of iPhone 6 and Note 4, to name a few.

Let us have a comparison of the Nexus 6 with the Galaxy Note 4 in context with the specifications of these devices. 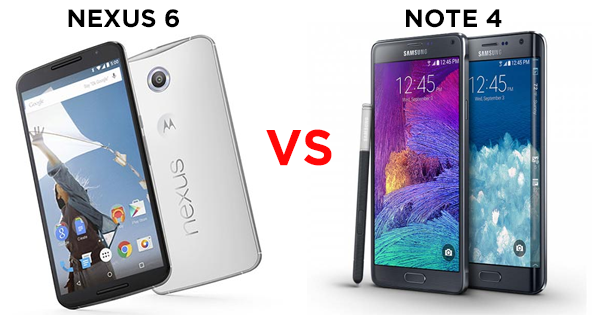 The Galaxy Note 4 has a Super AMOLED 5.7-inches, 515 pixels per inch display while Nexus 6 has an AMOLED 5.9-inches, 493 pixel per inch. Both the devices have got a bigger QHD display which is also protected by Corning’s Gorilla Glass 3 and the technologies used in them surely allows for crisp and vivid images but as far as the visual representations are concerned, the Super AMOLED is tad a bit higher on the display front.

Having said that, we think that the screen sizes of these devices will not leave any user dissatisfied.

The perks of being a flagship device means that it is bestowed upon by far the greatest computing power which will withstand any and every app and service thrown at them. The Galaxy Note 4 and the Nexus 6 are both powered by the Qualcomm Snapdragon 805 chip and the Adreno 420 GPU. Additionally, the devices are backed up by 3 GB of RAM.

The Motorola Nexus 6 has 32/64 GB storage options that are not further expandable while the Galaxy Note 4 on the other hand has 32 GB internal storage which can further be expandable up to 128 GB via microSD card.
Having a limited non-expandable memory is like the thing of 90’s today and while the Nexus 6 stumbles upon this fact, Galaxy Note 4 surely has a way out of this.

With the launching of Nexus 6 also came an update to Android OS, the v5.0 Lollipop. So while the Nexus 6 runs Stock Android 5.0, Galaxy Note 4 runs Android 4.4.4 KitKat with its TouchWiz customizations. Needless to mention, the Nexus line of products are known for their rawness with Android and with this new iteration of OS which has plenty of great features and design, the Nexus 6 surely wins this round.

Both the Nexus 6 and Note 4 feature a battery of 3220 mAh capacity. Nexus 6 comes with a Turbo Charger by which the device can last for around 6 hours with just 15 minutes of charging. The Galaxy Note 4 is not behind as it features a Fast Charging Mode that will charge up the device from 0-50% in 30 minutes and also an Ultra Power Saving Mode.

The Galaxy Note 4 boasts of Fingerprint scanner and a Heart-rate monitor among others. Being a product of the Note series, it surely comes with a classy SPen Stylus. Unfortunately, the Nexus 6 does not feature any such sensors apart from the basic ones like Accelerometer, Proximity, Barometer & Gyro- Sensors. Essentially, the Nexus devices have always focused on being more realistic to its user-device interaction and does not offer gimmicky features.

Samsung Galaxy Note 4 was launched in India at a price as high as Rs. 58,300 while the Motorola built Nexus 6 is priced at $649 is US, however it is expected to launch in India at Rs.45,000 (approx). Current Galaxy Note 4 is available for online purchase at Flipkart. Check Out Today’s Offer Price Here.