Google in partnership with Micromax, launched its Canvas A1 smartphone in accordance with Google’s Android One initiative to provide affordable smartphones to one and all. There are two more devices launched alongside from the houses of Karbonn and Spice. The specifications of all the three devices are kept same. 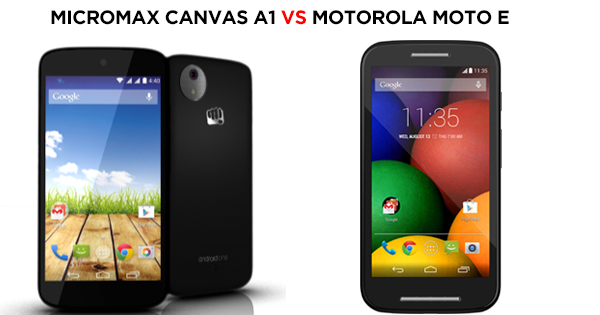 Let’s have a look at the Micromax Canvas A1 and compare it with the blockbuster Motorola Moto E.

The Micromax Canvas A1 looks simple from the front in a look but has an oval ring on the back panel which encloses the camera and flash. The rear panel is rubberized which will make the handling easier.

Motorola Moto E is covered in glass from front and the back panel is made up of plastic with matte finish.

Moto E on the other hand, has a 4.3-inch display with a resolution of 960×540 pixels and a pixel density of 256 ppi. Further, the display is protected by Corning’s Gorilla Glass 3.

The Canvas A1 is powered by a MediaTek MT6582 quad-core SoC clocked to 1.3 GHz coupled with 1 GB of RAM and 4 GB of internal memory (approx. 2.3 GB user accessible; expandable via microSD card). Having said that, a user cannot download anything on the device unless a microSD card is popped in and that includes clicking pictures as well.

Speaking of Moto E, the device has Qualcomm Snapdragon 200 dual-Core SoC clocked to 1.2 GHz paired with 1 GB of RAM and 4 GB of internal memory (approx. 2.2 GB user accessible; expandable via microSD card). Additionally, Moto E has Adreno 302 which helps in graphics rendering on apps and UI.

Both, Micromax Canvas A1 and Motorola Moto E run on Android 4.4.4 KitKat, but while the Canvas A1 is promised an update to Android L by Google, nothing is said so about Moto E just yet.

The Canvas A1 features a 5-megapixel rear auto-focus camera with LED flash which shoots at a resolution of 2560×1920 pixels and a 2-megapixel front facing camera which clicks at 1600×1200 pixels. Video recording can be done in Full-HD with these cameras.

Motorola Moto E has a 5-megapixel rear camera which shoots at a resolution of 2592×1944 pixels but is fixed focus with no LED flash. Also, there is no secondary camera.

Both the devices are dual-SIM and are 3G supported. Other connectivity options present are Bluetooth, Wi-Fi to name a few.

The Canvas A1 draws its juice from a 1700 mAh battery which is touted to last a day according to Google.

The Moto E on the other hand features a bigger 1980 mAh battery.

On paper, the Canvas A1 does looks tempting but Moto E is already a bestselling smartphone and offers similar environment to its users as the Canvas A1. Having said that, Micromax Canvas A1 is approved to get android updates for the next 2 years and also has a pure android interface which cannot be missed.